Leap Castle in Ireland is Haunted!

Leap Castle in County Offaly, in the East Coast and Midlands Region, is considered one of the most haunted places in Europe. Ghost hunters and researchers have studied the history and experienced the presence of spirits. The current owners have allowed filming and taping at the castle for television shows and videos. 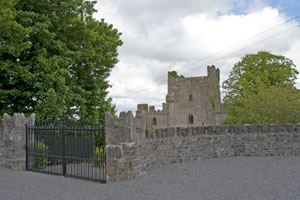 The bloody history of the castle includes murder and massacre of guests and inhabitants.

Leap Castle was built by the O'Bannon family and was the residence of the O'Carroll Clan in the 1500s. In 1532, the chieftain died and his sons were fighting for control. One of the sons murdered his brother, a priest, during a mass in the castle chapel. Thus, the chapel is called "Bloody Chapel" and the murdered priest is one of many spirits in the castle.

Another example of the horrible history of the castle took place in the late 1500s. The last chieftain of the O'Carroll Clan was at war with the Earl of Tyrone. He hired the MacMahon Clan to fight for him and then murdered them as they slept after the battle. The MacMahons join the other ghosts in the castle.

Yet another part of the tortured history of the castle was uncovered when workmen in the 1800s found a dungeon, or "oubliette", behind and underneath the altar. A trap door led to the spiked oubliette where many skeletons of victims were found. Legend has it that prisoners were pushed through the trap door to fall onto the spikes to die of injuries or starvation.

Mildred Darby, an owner in the early 1900s, held a séance in the castle. She met a ghostly figure and smelled what she thought was a rotting corpse. She reported her experience in the occult journal of the day. 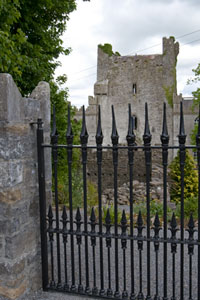 Local residents have seen lights and heard noises at the castle, even when the castle was vacant for many years after it burned during the fighting in the 1920s.

The owner of the castle in the 1970s had an exorcist come to rid the castle of the horrifying spirits. The exorcist did her work and stated that although the spirits were no longer evil, they would not leave the castle.

The current owners, the Ryans, are willing to share the castle with the spirits. They say that they can peacefully co-exist. 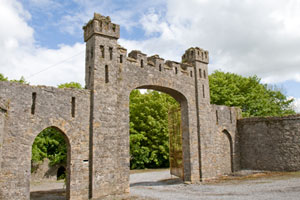 I went to Leap Castle on a recent visit to Ireland. I took driving directions from the information desk at nearby Roscrea Castle. I could see the castle from the road, but the gate was locked. Tours are available periodically.

The town of Roscrea and Leap Castle are located in the center of Ireland. To get to the Castle, go north on Main Street from Roscrea. As Main Street goes out of town, it is known as Kinnitty Road or R421. Travel about four miles until you see Brereton's Pub on the left. Turn left, go by the saw mills on the right and continue until you see the castle on the right. Perhaps you'll experience something interesting!

Here is a map of the area near Leap Castle: